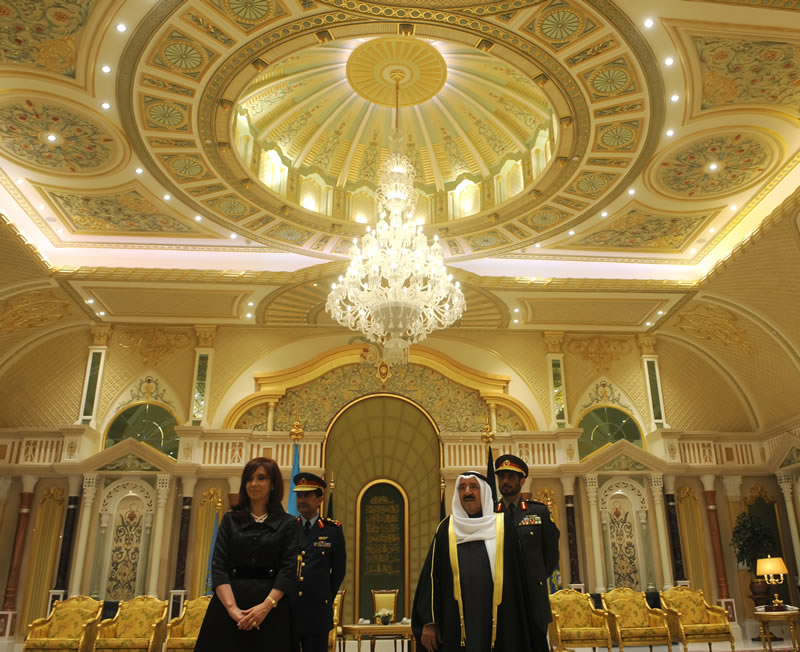 The President of Argentina, Cristina Fernandez Kirchner, Minsters and a committee of 100 business men are touring the Arab world. Argentinaīs tour includes, Qatar, Kuwait and Turkey.

The Emir of Kuwait Sheikh Sabah al-Ahmad al-Jaber al-Sabah greeted the President of Argentina at the Airport with all the honors. The President described the meeting with good words.

87 Argentine business men presented yesterday 28 private projects that range from biotechnology to food for a total of 3800 million USD. ďKuwait has an excess of capital and lacks resources,Ē said Hector Timmerman the Councilor of Argentina.

According to local media, the Emir of Kuwait designed Argentina as a ďstrategic centre of investmentĒ. La Naciůn, a local paper, reported that the meetings with The Kuwait Found for Economic Developments, which holds more than 100,000 million USD, are focused on communications, foods, and public work. However, energy and hydrocarbons are dominating the reports.

According to local media, Councilor Hector Timmerman said, ďThe Emir, has told us to use Kuwait as a platform to the rest of the countries of the Golf, which opens the doors of the Arab world for us.Ē

The President of Argentina was hosted in the residency Jahra of the Palace Al-Bayan, where the Emir hosts his guests. The President is also accompanied by her daughter. The palace of Al-Bayan holds a golden dome Mosque surrounded by water fountains.

Argentina is home to a significant Arab community. The biggest Mosque in South America and the Caribbean, the Cultural Islamic Centre King Fahd and Custodian of the Two Sacred Mosques, is located in Argentina, Buenos Aires.