Is Politics Streaking into Sports? 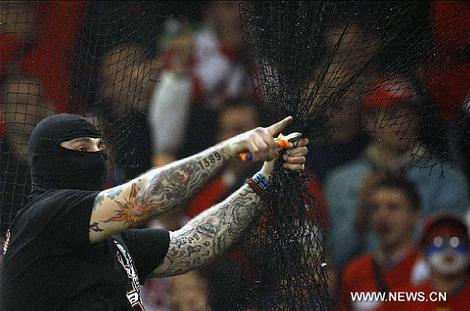 From the Common Wealth Games in Delhi, to Football Incidents in Italy. A confusing message reaches the masses through the games. Is politics streaking into sports?


"
It is estimated that more than 1 billion people saw the World Cup.
For Athensī Agora it was the Olympic Games. For Rome it was the bloody Coliseum. For the Inca Culture it was a game to the Death. Politics, power and sports have always been connected.

For politicians in all cities, it is a golden opportunity. "Bring out the sports, entertain the masses, bring out the games, distract the agenda, change the dialogue and get your image on the papers." Why not get your name chanted in a popular spontaneous hymn and while you are at it add a election campaign to the equation. When a conflict breaks in sports viewers go off the charts. But, is security becoming too hard to handle?

Games are a perfect to stand out of the crowd. One message can reach a millions. Politicians love the games, and any games will do. It is estimated that more than 1 billion people saw the World Cup. In the US 9.3 million people watch the Super Bowl. A 30 second ad in the Super Bowl can be worth $2.4 million. But who is counting? Politicians, football players, fans, agents, and even streakers.

Recent games have been controversial. Delhi Common Wealth games saw all type of problems. From accommodations, pools, late run sweeping tracks to even bridge class collapsing. But, nothing stopped the political figures from attending the closing ceremony.

In Italy sports took on a another International dimension. In the Italy's Euro 2012 Group C qualifier a group of Serbian fans disrupted the match. Some where arrested and some where questioned. Italian Special forces contained those riots. Have things gone too far in the world of sports?

Streaking by definition is the act of running nude through a public place. Recently streakers started wearing ads when they "invaded" the games. Considering these events, it may be time to change the definition of streaking. Is politics streaking into sports?