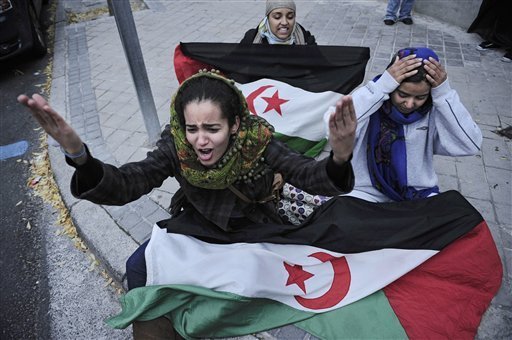 
"
The people called on the United Nations Security Council to take action to protect them.

A camp in Western Sahara is in the heart of this conflict. Moroccan security forces raided it to clear the protest camp. The raid left 11 dead. The reports are contradictory and confusing. Journalist are not reaching all parts of the area and most images that are being broadcasted are those taken by citizen journalists or activists. Moroccan authorities at one point stated they went into the camp to rescue woman and children. However, many other disagree strongly.

The Polisario Front issued a statements saying that 159 people were missing. El Pais, of Spain, published an article saying that the Polisario Front has risen the count of the dead to 19 and that they assure the Western Sahara lives a “situation of terror” in which marroquian agents abandon the bodies on the streets to spread panic among the population.

Protesters and Human Rights demonstrations have taken the streets of several cities of Spain focusing in front Moroccan Embassies inside Spain. Sources inside the Sahara camp say people are being taken away from their house. The images are clear on the violence. Cars on fire in the streets, protesters scrambling the corners, rocks, tears gas and confrontations. A government spokeperson warned that when the press is instructed to leave it is because military forces will act.

The Spanish government which has relationships with Morocco has been driven into the international spot light but the real conflict situation is happening in the Sahara Camp. History between Morocco and the Western Sahara is long and complex. However, violence is fast and instant to act. A government representative of Spain said Spain’s government is sensible to human rights and condemned the violence and called for it to stop.

The people of Western Sahara and campaigners called on the United Nations Security Council to take action to protect them. Government representatives of Spain and Parliaments of Spain have unanimous agreed to statements and condemned the violence, urging it to stop.